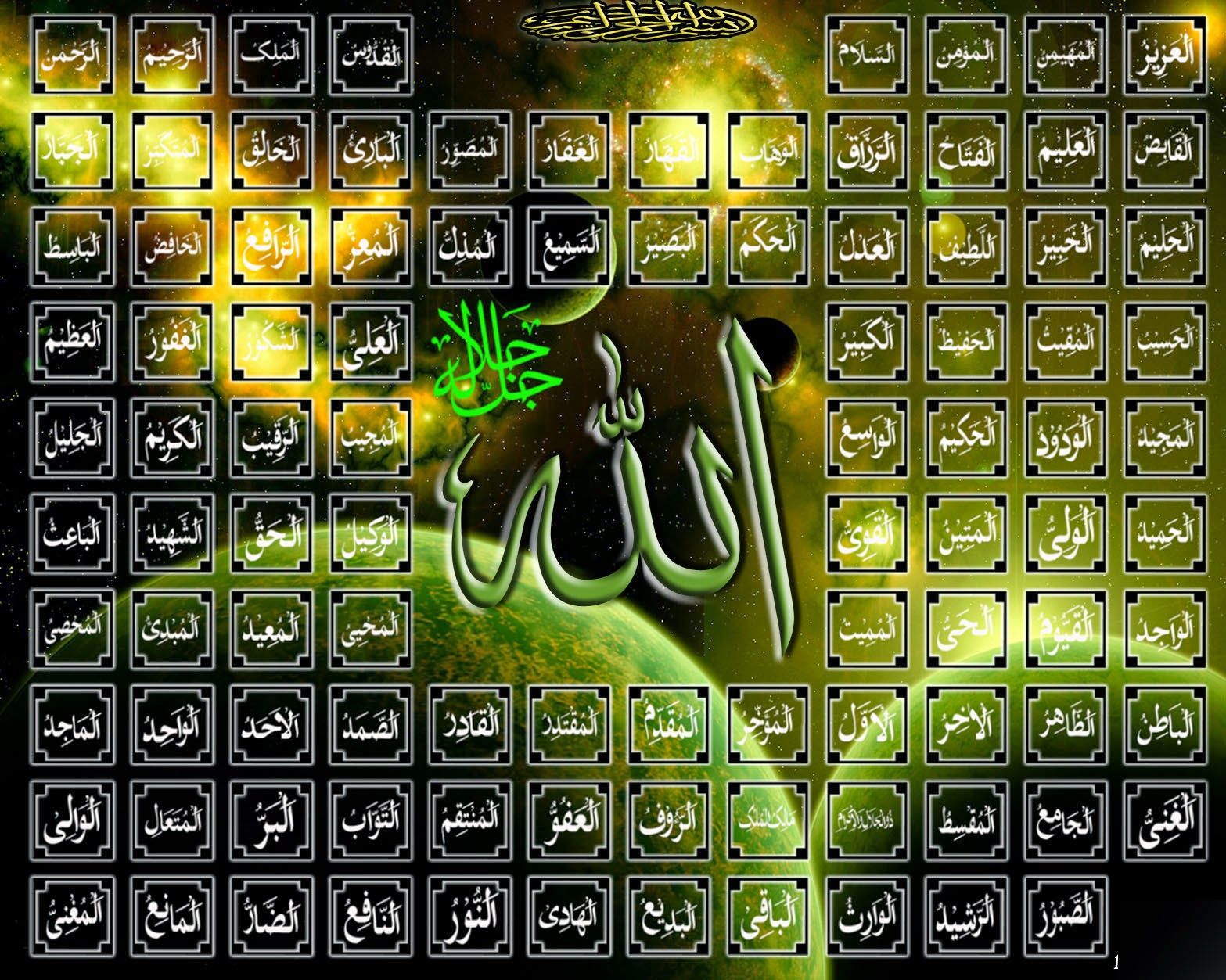 S.W.T  ( refer to: Subhanahu wa ta’ala, Arabic for “May He be glorified and exalted”).

‘Allah’ (Swt) is the proper and personal name of the Almighty, the Lord and Creator, Who created the universe and everything in it, including us human beings. The Lord, the Almighty, was not named ‘Allah’ (Swt) by any human being or by any Muslim. He introduced Himself to us by this name,  ‘Allah’ (Swt). The first verse of the holy Qur’an and the first Cardinal Article of faith testify to this.

In the name of Allah, the Most Compassionate, the Most Merciful.

Note: Muslims recite this whenever they begin to do anything and everything. They invoke the name ‘Allah’ (Swt) to include His blessing, mercy, and assistance with what they undertake, whether it is major or minor, thereby, avoiding the interference of Satan and his evil doings. This bears witness that ‘Allah’ (Swt) is His proper name.

All praise is due to Allah, the Lord of the Worlds.

Note: This is the first verse of the first surah (Chapter) namely Surah-e-Fathia ( The opening Chapter), with which the holy Qur’an begins. Here, the Almighty introduces Himself to us as ‘Allah’ (Swt).

“[There is] no deity but ALLAH, Muhammad is the prophet of Allah”

Note: To remain faithful (Muslims) or to enter into Islam, one must verbally declare this Kalimah (Decalration) of faith, certify it by heart, and have unshakeable belief in its truthfulness.

‘Allah’ (Swt) revealed to Prophet Muhammad (Peace be upon them), ” I was a hidden treasure and willed to be manifest, so I created what I created” [Shamaa’il Tirmidhi]. He alone created everything and everyone.  To begin the process of creation  ‘Allah’ (Swt) first created the nur ( Light) of Muhammad from within his nur (Al Mawahibu’l-Ladunniyah].  ‘Allah’ (Swt) created angles from the nur as well. The Jinns were created from fire, and Shaytan  (Satan)  belongs to this category.  ‘Allah’ (Swt) created man from earthly soil, and science confirms that the elements found in the human body are also found in in earth.

Unlike the birth of other humans,the creation of Adam, Hawwa and of Isa (Jesus)(A.S), as explained before, are all signs of ‘Allah’s (Swt) power of creation.  ‘Allah’ (Swt) blessed Maryam (Mary) (A.S) and miraculously bestowed on her a son, Prophet Isa (Jesus)(A.S) without a father. This miraculous birth does not make Isa (A.S) His Son, nor does it make  ‘Allah’ (Swt) his father.  ‘Allah’ (Swt) is Wahid (Single and alone), and everything else is His creation that serves Him, surrenders to Him, and worships Him.

Allah (Swt) is free from parents and did not choose to have children. He has no partner who shares His being or His power.  ‘Allah’ (Swt) is alone; He is One. Never did He beget, nor was He begotten. None is like Him, and He is not like anyone or anything. No one is equal to Him. No one interferes with Him or with His works. He does whatever He wills. His plans and words are unchangeable.  No one questions Him, and He is not answerable to anyone.  ‘Allah’ (Swt) gives life and causes death at its fixed moment.  ‘Allah’ (Swt) causes clouds to release water, wherever and whenever He wills.  ‘Allah’ (Swt) merges the day into night and from the night brings out day. He set in motion celestial bodies that constantly travel on their fixed path for a fixed period.

He is the All-Knower, Not a single leaf falls on the ground that escapes His knowledge. He knows the needs of His creatures very well. He provides for all and nourishes all, and no being is left out from His provisions, no matter where they are, whether that is beneath the earth, deep in the seas, high above the skies, or in places we cannot even imagine. Besides humans and Jinns, none of His creations have free will. They all submit to Him; they all worship Him (In their own ways ) and are busy in His remembrance.

Only humans and jinns are given the unique ‘power of choice’ to choose between the righteous path and the deviant one.  ‘Allah’ (Swt) is merciful and does not take vengeance for His personal sake, but only to make right or for the sake of justice.  ‘Allah’ (Swt) does not destroy any nation until He brings upon them His divine message and warnings and gives them ample time to follow and submit. No creature is able to see Him’ yet, He sees all. Humans are not given the power to see Him or the intelligence to conceive of Him, except through his divine message and guidance.  What has been said above it but a summary of His introduction of Himself. To develop a better understanding, I quote the following from the holy Qur’an regarding  ‘Allah’ (Swt) being.

The following is a tafsir (Explanation) of a very famous verse, called Aayat-ul-Kursi (aayat-verse, kursi-throne). The Words in parentheses and boldface are translations of the Qur’anic Arabic embedded within this unique explanation. 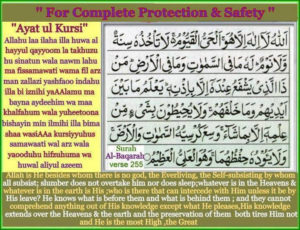 (Allah) Almighty is Self-Existing, Self-sustaining. He has existed for eternity, is the embodiment of all and every outstanding quality, is free of all blemishes, alone is worthy of worship and (none) is ( worthy of worship except Him) who has always remained (alive by Himself), is not in need of or reliant on anyone and will remain alive and in existence forever.

He will never experience death and is Self-Sufficient and is (for everyone),for the entire universe (the Sustainer) and He alone is responsible for the universes’ affairs. . And (He does not feel drowsy) which is the precursor to sleep because He never experiences tiredness or drowsiness, and therefore is also free from in-activeness which is result of being tired or drowsy.

(And) similarly (nor) does He (sleep) because while asleep the nerves of the mind are relaxed after which knowledge and comprehension are rendered ineffective and become suspended, and the alertness and intelligence of sense become diminished. And it is clear that for Allah Almighty these characteristics are impossible because He is the Inventor of this great universe and is responsible for maintaining its affairs at every moment and every second, as there are changes happening at all times, that are occurring under His attention and with His knowledge. He is aware at all times of all things in their condition and is neither unaware nor asleep.

(It is His and belongs to Him all that which is in the skies and on the Earth); all the creation in the skies and on Earth are His subjects and His property, and everything is submissive to His power and wish. (And who is it that intercedes) for anyone (in His court except by His order). Allah Almighty’s greatness, high rank, and majestic attributes mean that without His permission no one can intercede in His presence.

Allah Almighty (is aware) of ( everything that is in) the past of those who live in the skies and on Earth and that which (has gone before), that is, all that which has occurred in the world’s affairs, (and ) knows (everything that is to come) in the future. Therefore, Allah Almighty is aware of both their past and future, (and ) those of this universe (cannot encircle) or enclose (any-thing) that is (in His knowledge) and which He is aware of (except by His own will). In summary, leave alone the knowledge of the entire universe, a tiny iota of Allah Almighty’s vast knowledge is too difficult for a human to comprehend. Creatures only have the knowledge that is given to them by Him.

(Permission has been given by His throne), that is, His knowledge…or His greatness. or His power and ownership..or by His magnificent, powerful, everlasting, and immense creations that are below His kingdom but above the skies and his known as His throne; or whose reality no one except Allah Almighty is aware of, whether in (the skies on on Earth). In other words, His knowledge, His magnificence, power, and wisdom or His beautiful, gracious, and magnificent creations who have encircled the skies and the Earth and whose compound has within it the  skies and Earth, and which (He finds no difficulty keeping watch on both). Watching over the well-being of the Earth and skies does tire Allah Almighty, but in fact this caring is simple and very easy for Him. He is the Sustainer and Caretaker of all things, He does what He wills, His intention is firm, and that which He intends, He definitely makes it happen.

And why should not this be so because He is dominant and overpowering over all things, and (He is) above all matters (mighty and superior), magnificent, and exalted in His recognition, and this one revealed verse known and recognized as Aayat-ul-Kursi is more elevated and greater that any other verse of the Qur’an.

In the following verse, Allah (Swt) describes Himself through a metaphor of blessed light.

Allah is the light of the heavens and the Earth. The likeness of His light is as a niche wherein is a lamp; that lamp is in (a chandelier of) glass; the chandelier is as a star glittering like a pearl, lit from a blessed olive tree, neither eastern nor western, whose oil is most luminous, even though no fire touches it. (This) is all light upon light! Allah guides unto his light whom he wills…[Qur’an 24:35]