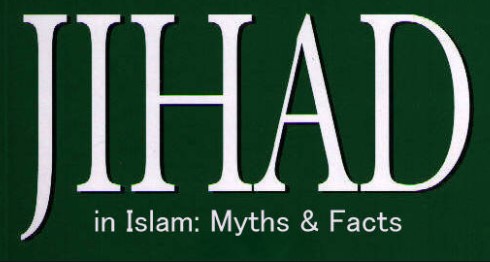 As noted earlier in the past blog post, the purpose of every kind of jihad is to seek prominence from Islam. The aim of jihad through the sword, i.e., armed jihad, is not to convert anyone to Islam forcefully or to kill someone if he refuses to become Muslim.  Nor does this jihad mean to kill or be killed for forceful conversions.  It means to protect Muslim’s lives, their lands, their property, their interests, their livelihood, and their freedom to practice Islam.  It is also to liberate people who call upon Muslims for help and to clear any hurdles from the way of preaching and propagating Islam.

Armed jihad was and never is aimed at common people, because they generally do not become obstacles to the propagation of Islam. It is always the governing authorities, the aristocrats and elites, and the rich and powerful people who resist, hinder, and prevent the Lord’s message from getting to their people, so as not to give them a chance to embrace it. Armed jihad is directed towards those lords and tyrants who use their power, authority, and rule to resist the commandments and absolute authority of the Lord. In this way, such opponents of Islam do not do any service for their people; instead, they oppress them by preventing them from reaching the absolute reality.

In fact, armed jihad is in favor of the common man. It liberates from the tyranny of the few and connects people to the one true Lord. Because of a few selfish individuals and their supporters, millions of people should not be left to become ultimate losers. This is one of the main reasons Allah (SWT) instituted the obligation of jihad upon Muslims. Armed jihad is not a much in favor of Muslims as it is in favor of non-Muslims. It saves non-Muslims from everlasting harm and failure if they choose to embrace Islam. Nonetheless, through His loyal servants, Allah (SWT) fulfills His promise of getting the message across to all people.

Throughout history, there have existed, everywhere and in every system, people who resist change either because they are satisfied with the status quo or because their personal motives and interests are involved, which they would like to see remain secured. Thus, even though change may be good for society, some people resist it. When some see benefit in guiding people, there are others who find benefit in keeping them misguided. Therefore, they fight head-on to secure their interest. Some even resist change because they are proud of the system under which they are living.

When Allah (SWT) willed to get His message across through His prophets and through their respective followers, he made it incumbent upon them to fight in His cause for the betterment of all people. As with other nations before Muhammad’s (Peace be upon them) , Allah (SWT) also made it compulsory on Muslims to do armed jihad in the way of Allah (SWT) in order to protect Islam, to provide shelter and security to all those under the umbrella of Islam, and to achieve prominence for Islam.  In that regard, the holy Qur’an constantly reminds and warns its followers to avoid transgression and to abide by the rule of law in every aspect of their lives, especially in jihad; otherwise, their efforts will not be fisabilillah (for the sake of Allah (SWT), as it required to be.

Since no more prophets were to come after Muhammad (Peace be upon them) Muslims had to fulfill this obligation of preaching and protecting the cause of Islam. If this world was a peaceful place and  if it were not in human nature to fight, fulfilling this obligation would be easy, and Muslims could have easily taken the divine message around. However, this was not and is not the case. Human beings fight over every small thing for which they can fight. The duty of carrying the message of the Lord was only attached to fighting if and when there became a need to fight to preach the message of Islam freely.

There have been times in the past when armed jihad was necessary, and it still is in some parts of the world where Muslims’ life, property, and freedom are in danger and where their livelihood is being cut short. But overall, things have changed now, and in major parts of the world people have freedom of religion, freedom of choice, and the free flow of information about religion. So in my humble opinion, in those parts of the world, armed jihad is not needed, is contraindicated, and will not serve its purpose of removing hurdles from the path of propagating Islam.  Still, if in the name of Islam or jihad, someone inflicts pain on people through any means, certainly, this behavior is un-Islamic and cannot be labeled Jihad.

Once a person embraces Islam and embarks on the path to success, Allah (SWT) makes it incumbent upon him to strive for other’s success, too. Allah (SWT) wants success for all of His slaves, and through jihad He makes it possible for all to be successful. He has designated great rewards for the mujahids (those who do jihad) of Islam. Since Allah (SWT) put this duty upon him, since all the rules and regulation of jihad were also established by Him, and since the mujahid is in the service of Allah (SWT), he must not allow his nafs (base-self)to interfere and violate any rule thereof. If he does, then he is not a mujahid; he can be called a terrorist, extremist, or whatever. To do true jihad with the sword, a mujahid first needs to do jihad with his base self and take full control of it.

To elaborate further, Jihad is an effort to eradicate sinfulness, impiety, mischief, and injustice and to employ righteous acts, not for any personal gain, but for the benefit of humanity (as mentioned in the hadith quoted earlier).  Jihad intends to solve the problems of people, to liberate them, to set them free from the bondage of people and society, and to uplift them from oppressive and depressive states. Most importantly, jihad results in connecting people to their Creator and shows them the true purposes of life.

Jihad’s first and foremost purpose is not to kill or cause bloodshed, nor is it to acquire any worldly gain, including wealth, land, etc. It intends to invite people to the lord. Once people receive the message of Islam and decide not to embrace it, Muslims are to leave them alone, because there is no coercion in accepting Islam [e.g, 2:256; 10:99; 15:2-3; 18:29; 42:48; and 50:45] If they do not accept Islam but choose to live under Muslim rule and protection, they have to pay jizyah , a fee/tax for the protection provided to them. These dhimmis (non-Muslims living under Muslim protection) are entitled to full rights as citizens, but unlike Muslims, they are exempted from giving zakah (obligatory charity) and from serving in the military. With regard to dhimmis, the Prophet (Peace be upon them) directed Muslims to:

“Be mindful of the rights of dhimmis, because I will stand on Judgment Day, as a plaintiff on their behalf for any injustice done to them.” [Kanzul –Ammal]

The commandments underlined in the holy Qur’an and the teachings of the holy Prophet (Peace be upon them) clearly state that before the initiation of armed Jiahd, people must first be invited to accept Islam. Before going any further I would like to present a few Qur’anic verses and ahadith in the next section to further correct prevalent misunderstandings and to present a clearer picture of jihad.  This will be available on the next blog posting!

Topics to be covered in coming future Insha Allah!: