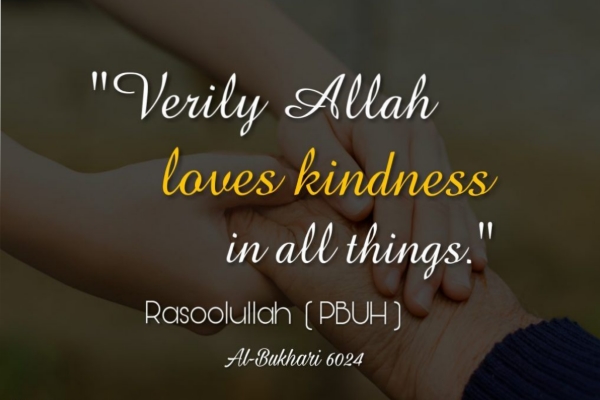 Allah (SWT) created everything in the best manner and according to its purpose. Each creature lives by natural rules and plays specific roles set forth by Allah (SWT). As such, He provided creatures with everything necessary to fulfill their purpose. Since human beings have a higher purpose, He endowed them with free will, intelligence, morality, common sense, etc., and He created them in His own image. To be created in His image does not mean that He looks like man, but that humans have been endowed with His qualities in accordance with their capacity and ability [Qur’an 30:30]. No other creature has been bestowed with this honor. How can all this be devoid of Love?

WE apparently love what we make with our won hands, even though we are not creators of anythings. We simply put together what is provided to us as raw material by Him. Since we love what we make, He must love us more, because He made us the best among His creatures.  How is it possible for us to achieve the purpose of our life without His caring and love?

In the very beginning of the Holy Qur’an, Allah (SWT) reveals Himself as Ar-Rahman ‘the Most Compassionate’ and Ar-Rahim ‘the Most Merciful.’ How can He be compassionate and merciful without love? He could have chosen his other attributes at this place to introduce Himself, but He chose Ar-Rahman and Ar-Rahim precisely to show His love and mercy.

Since we are His creatures, however much love we need from Him comes unconditionally. We do not have to do anything special to receive this love;everyone gets it equally. When we require more love and compassion from Him, we have to go out of our way and beseech His mercy, and then work hard and strive to become eligible for it.  Certainly, our Lord is full of love for His creations. Besides being beneficent, Compassionate, Merciful, He is Al-Wadud, The Most-Loving. Many other attributes of our Almighty Lord also reflect His love for us .

He knew definitely that in this world we would commit sins, therefore, in the holy Qur’an He says:

And ask for forgiveness from your Lord; then bow down towards Him; without a doubt my Lord is truly Forgiving and profoundly Loving. [Qur’an 11:90]

When He warns us, it is to our own benefit. When He mentions His absolute power and comprehensive majesty, He simultaneously reveals Himself to profoundly love all of His creatures. Although He has power to do anything He wills, He prefers to love us. He reveals in the Qur’an:

Without a doubt your Lord’s hold is quite severe. Without a doubt, He creates the first time and He is to do it the second time around. And He is All-forgiving and Most-Loving, the owner of the magnificent Throne; the Doer of whatever He wills. [Qur’an 85:12-16]

The Qur’an also tells us that Allah (SWT) loves:

In addition to these Qur’anic testimonials to Allah’s (SWT) love for us, numerous sayings of Prophet Muhammad (Peace be upon them) bear witness that Allah (SWT) loves us.

Still further, Prophet Muhammad (Peace be upon them) informed us that Allah (SWT) loves those who practice abstinence in the world and those who are Allah-Conscious, free from want, and hidden from the view of people.

A man came and said: “O Prophet of Allah, direct me to a deed for which I shall be loved by Allah & by people when I have done it.” He replied: “If you practice abstinence in the world, Allah will Love you, and if you abstain from people’s possessions, people will love you. ” [ Al-Tirmidhi, hadith #1350; also transmitted by Ibn Majah]

Allah’s prophet said: “Allah loves the servant who is Allah-conscious and is free from want and his hidden (from the view of people). ” [Muslim, hadith #1384]

The message of Allah’s (SWT) love that is to be found in Islam, both in the Qur’an and in the sayings of Prophet Muhammad (Peace be upon them), is clear and unmistakable. Allah (SWT) is The Loving, full of loving tenderness. He is The Most Compassionate, enveloping us in a womb-like protection and throwing out to us a rope of salvation whenever we start to stray. He is The Most Merciful, full of mercy to the believers, merciful to all people, and His mercy extends over all things.

On the Day of Resurrection, His mercy to His servants will be 99 times that of all the mercy that all of creation has ever shown to each other. He is also The forgiving, and He loves to forgive us and He will continue to forgive us as long as we ask for forgiveness and repent sincerely. He is ever ready to run towards us if we will just take a few steps towards Him. This is the Islamic concept of Allah.

Allah (SWT) naturally endowed us with common sense and other qualities to find, connect, and relate to Him and to worship Him, It would be quite difficult had He not done that for us. He helped us and saved us from the hassle and pain of trying to discover Him ourselves. This is another sign of His love for us.

Allah (SWT) sent prophets, one after another, to rightly guide and teach us how to work towards achieving ultimate success. He revealed a complete system of life through divine books, so we can know what is good and bad for us in this life and in the Hereafter. He equipped us with every faculty necessary to explore, know, and utilize His bounties in order to be thankful to Him and to achieve the purpose of this life.

He created love and affection in us so that, for example, parents can raise their children, children can care for their parents, husbands and wives can live happy, peaceful and productive lives, and other happy relationships could be established.

Nothing could be possible without His love. Now, that love requires us to understand our Master, to know Him, to properly follow His guidance, to recognize His being, to worship Him properly for His pleasure, and to thank Him for what He has granted us and what He ultimately wishes to give us: success in the Hereafter.

Where else do we find a Lord Who rewards us for treating ourselves well? Before requiring us to fulfill our obligations to Him, He directs us to fulfill our duties to each other. When true believers fulfill their duties to other humans beings for His pleasure, He considers it worship of Himself and fully rewards them, too.  Even the activities that are part of direct worship bring unlimited benefits to the worshiper and not to Allah (SWT). Where else do we find such a Lord? Nowhere, but He himself is the One and Only.

The ‘lords,’ ‘masters,’ and ‘bosses’ of this world demand personal service and favours before doing favours for us, but not the Lord of all lords. He is there to give and does not take anything in return for Himself. That Lord is compassionate, Merciful, and Just. Islam requires its followers to invite other to Allah (SWT) and to His way. It wants people to recognize that fact, so they too can become His true servants and work their way to success, the ultimate success.

Since it is human nature to attempt to perceive the Supreme Being, people ask numerous questions regarding His form and being. The following should give a well rounded idea and understating of Allah (SWT) the Almighty Lord.

Gender is for creatures, not for the Creator. Allah (SWT) is free from any gender category or other classification. He is not like us or like any of His creations. Allah (SWT) is not male or female. He is the Supreme Being, above and beyond any gender categories. When we use a pronoun in place of Allah (SWT), we use a masculine pronoun not to show that he is male, but as He Himself used it in the divinely revealed books.

2.  Does Allah (SWT) know our actions before or after they occur?

One of Allah’s (SWT) attributes is the All-Knower. He knows whatever is taking place and whatever will take place in the future, including our actions and our intentions. His infinite knowledge covers everything from the beginning to the end, and even that which is certainly beyond our conception.

We are not given the power to see Him. If we could see Him, everyone would have automatically believed  in His existence, and the whole purpose of having faith would have been invalidated. On the Day of Judgment, only the ‘Successful Ones’ will be able to see the Lord, and it will be a great disappointment and unimaginably painful for the faithless, the losers, not to be able to see Him, even on that day. So close, yet so far!

4. How do you know if he is please with any of our actions?

When we perform an action, a good deed, with the pure intent of pleasing Him and as per His instructions, we should have unshakeable belief that Allah (SWT) is pleased with our action. The true satisfaction of heart and mind and an unexplained contentment and joy felt within the soul indicate acceptance of that good deed and that it has earned the pleasue of Allah (SWT). For example, a simple smile on our parents face, a thumbs-up gesture from our coach, or a handshake with our boss is a sign of contentment and joyful victory. An indication of Allah’s (SWT) acceptance of our good deeds is felt within our soul and shows up brightly on our faces.

5. What difference does the belief in the ‘Oneness of Allah’ (SWT) make in Muslims?

Belief in the Oneness of Allah (SWT) causes undivided attention towards the Supreme Being when: submitting to His will, performing the acts of direct worship, following His commands, maintaining a spiritual connection, and being fearful being accountable. This belief clears away confusion and satisfies the soul. It assures us that there is only one place form where we can find help, justice, and the fulfillment of our desires, It provides strength, confidence, a sense of belonging,peace of heart, mind and soul, hope, dignity, and unshakeable belief.

Since Allah (SWT) is One, His message and guidance must also be one. The way of life prescribed by Him is also one. The unity of Allah (SWT) brings unity to all, and the powerful energy that radiates is immense. The Unity of Allah is perfection, and anyone who comes close to this perfection finds absolute satisfaction.

6. Why does Allah (SWT) not have children?

Having children is naturally a sign of weakness and ultimate recognition that a father/mother will eventually die and children will take over. A human father is naturally weak and eventually requires the help of a child to remain strong. A child fulfills the needs of his father who may suffer from many inherent deficiencies, or if a father is rich he needs a child to inherit his wealth and prolong his name or business. All these are sings of weaknesses.

However, Allah (SWT) is not weak, and He thus does not need children, All of His attributes are clear proof to that effect. According to the biological process of reproduction, a male requires a female to have children. Allah (SWT) has never taken a female companion; therefore, He does not have children.